DEEP DOWN NOTHING HAS CHANGED

Martin Vitaliti (Buenos Aires, 1978) was the winner of the second edition of Museo ABC Drawing Awards. This award consists in exhibiting the artwork and publishing a catalogue of it –it is an initiative of our Museum and the art fair JustMad. Born in Buenos Aires, formed in Bariloche and, currently, living in Spain. Martin Vitaliti vignettes always pretend to tell a new story. Taking as a starting point comics like The Adventures Of Tintin, Corto Maltese or Superman, he transforms them with different techniques giving life to the book Martín Vitaliti, deep down nothing has changed… 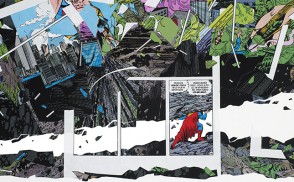