DESTRUCTION OR THE ARTWORK

Museo ABC joins the tribute that Spain pays to André Elbaz (Morocco, 1934) through three parallel samples: Ciudades orientales (Eastern cities) –in the Arab House of Madrid–, Iconotextos, Hay Festival –a project in the Alhóndiga art space building of Segovia–, and La destrucción o la obra (The Destruction Or The Work) –first exhibition dedicated to the latest and most provocative stage of the artist.

André Elbaz is a plastic artist that has lived in four of the five continents and is immersed in the traditional Japanese techniques on paper and in the most innovative ways to use paper as a support and means, matter and writing. After learning to make vegetable fibers, cooking, and whitening them, he then discovers to reinterpret the drawing and pusging the paper to the limits: he glue it creating collages, he tear it with his own hands and he grind it into fine patterned strips. Beyond his study of plastic matter, André Elbaz builds a speech committed to his era. 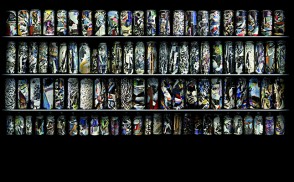 Destruction or the artwork