To mark the 450th anniversary of William Shakespeare’s baptism in Stratford-upon-Avon, our Museum pays tribute to British playwright with the exhibition and the book Shakespeare: Dance And Delight. Pablo Márquez (Madrid, 1957) divides the catalog into three suites: 20 illustrations for an imaginary edition of The Tempest (inspired by prints of Andrea Mantegna), a series on A Midsummer Night’s Dream; and a final compilation of extracts where Shakespeare talks about the nature accompanied by illustrations inspired in Leonardo da Vinci’s illustrations of his studies on botany. A beautiful exercise of some of the most emblematic of English literature passages. 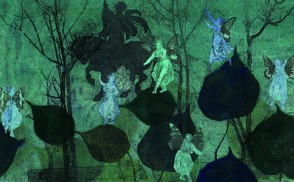