REHEARSAL FOR A GREAT PLAY

This eighth edition of the program Conexiones is done by José Luis Serzo (Albacete, 1977), who presents Ensayos para una gran obra (Rehearsal For A Great Play). This is an exhibition project expressly done for our Museum, where, in a monographic way, the artist shows us for the first time his drawing.

Serzo develops its ambitious production in cycles that, occasionally, take him years to develop. Ensayos para una gran obra (Rehearsal For A Great Play) is the title of his latest series, and is starred, again, by the Serzo’s alter ego Blinky Rotred along with his daughter Maya (in fiction and in real life). In these drawings we see father and daughter engaged in various actions and stories while they sketch prototypes to improve the world. In the will to build a common fix space, the effort of the adult will bring out ideas and strength out of the crystalline gaze and out of the innocence of the child. In Contemporary art Serzo’s story is pretty rare because of his theatrical style in his facilities and in his drawings. The force of the classics, as in theater, is evident in Serzo’s work. 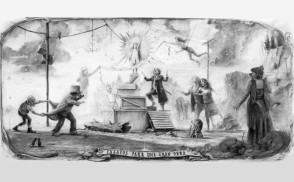 REHEARSAL FOR A GREAT PLAY