This ninth edition of the program Conexiones is done by the British artist Simon Zabell (Málaga, 1970), who presents Drawing And Translation This is an exhibition project expressly done for our Museum, where drawing is its main force.

Interested in how languages ​​are translated, Zabell has investigated the often elusive boundaries of the visual field into other areas, such as literature or music. Thus, his work began to be recognized as one of the most personal and suggestive of the nineties national scene while he developed projects around the concept of the Nouveau Roman French literary movement —and more specifically about the writing of Alain Robbe-Grillet.

Despite his held back and distanced appearance, Simon Zabell analysis on the visual theoretical components become available to the public since its unwavering pursuit of formal perfection, the internal balance of images and a sensitive material beauty.

Impeccable in its internal theoretical structure and adapting to the nature of the program, Zabell has developed for this occasion an specific project that has as its starting point the question “What does the picture mean?” —both in its production and in its working method. 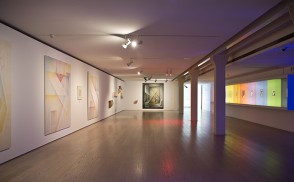