The Museo ABC presents Fate Lines, the eleventh edition of the program Conexions created in collaboration with Fundación Banco Santander.

The invited guest is the artist Marina Vargas (Granada, 1980) who created a project based on a tarot session by a Cuban «Santera». The nine tarot cards that appeared in this session have been interpreted by the characteristic vocabulary of the artist. Marina Vargas is one of the few creators of her generation who has built a language of her own, an iconographic world with antagonistic elements: Baroque and Pop, or Surrealism and Symbolism. In her unique and original universe, coexist references to the Mexican popular culture, the African sorcery, the Caribbean craft or the Catholic tradition of Andalucía (where she was born).

Colección Banco Santander lended two magnificent ornamental ceramic Alcora vases for the project. The Alcora Royal Factory was founded in 1727 in Valencia following the example of other European manufactures. During its second period (1749-1786), the vases were richly decorated with pebbles and organic elements. Marina Vargas takes the flowers, fruits and vegetables as an inspiration to create her characteristic arabesques and ornamentations. On the other hand, from Colección ABC, Marina selected a cover of the Blanco y Negro magazine published in November 1930, illustrated by one of the few female artists at the time, Ángeles Torner Cervera (a. t. c.). The characters of the drawings are the Kings accompanied, in a jumbled composition, by Horses and Jacks. The Spanish Cards are, thus, connected to The Tarot of Marseille. The project is described in a text by Óscar Alonso Molina, the curator of the program Conexions, and in an essay written by the journalist Susana Blas to understand the world of the Tarot. Every book includes a card that is chosen at random —or by the destiny—. What card is waiting in your catalogue? 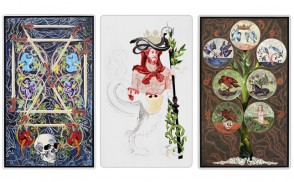