SILENO. DRUMS IN THE BATTLE

Drums in the battle is a books that approaches the First World War from a different point of view, the drawings in ink and gouache, by an observer from the distance of a neutral country: Sileno in Spain. It is a renewed study of the most remarkable moments of the War: the battle of Verdun, the Gallipoli landings, the invention of the terrifying zeppelins, the war at sea, the involvement of the United States in the conflict or the difficult neutrality of Spain. It forms a burlesque chronicle, but also a thorough and accurate narration, of the conflict.

Víctor Zarza, professor of the Facultad de Bellas Artes of the Universidad Complutense of Madrid and curator of the exhibition, studies the life of Sileno (writing the first biography ever published of him) and his works in the Colección ABC. Pedro Antonio Villahermosa y Borao, (Saragossa, 1870 – Madrid, 1945) was one of the most remarkable cartoonists in Spain. Best known as Sileno, he would be one of the best artists of the Spanish Illustration.

The magazine Blanco y Negro, the newspaper ABC and its supplement Gedeón, published weekly cartoons by Sileno as a briefing of the main developments of the First World War. The catalogue gathers a selection of 100 original drawings of this warlike series. These works had never been studied by a curator or showed to the public before. They are accompanied by the text of the joke as it was originally published, but the catalogue also includes a short summary of the moment of the War to which it refers. There is also a final chapter that includes a selection of 20 masterpieces of Sileno among the 3,725 drawings by this author in the Colección ABC. 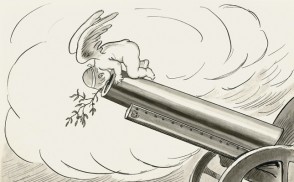 SILENO. DRUMS IN THE BATTLE