This catalog, which is composed of more than 450 works and approximately 300 duplicates, possibly constitutes one of the best anthologies of the most popular Spanish cartoonist ever seen. He reached this success thanks to his contributions with ABC newspaper and Blanco y Negro magazine; but especially to his joke for the Spanish press from 1921 until a few days before his death in 1933.

It is divided in five sections: (Comienzos, Xaudaró en Madrid, París, Los años de retiro and El regreso a Madrid).  The text goes through his private life from his birth in Philippines in 1982, where his father was destined because of his role of soldier and engineer, until his death in the capital of Spain. This is meant to facilitate the reader’s comprehension of the context and circumstances in which his images were created. Peculiarly, they become popular when Torcuato Luca de Tena suggested him to draw in all of his works an unnamed puppy that made the readers went down a treat. 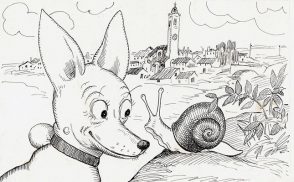