The catalogue entitled Dibujantas. Pioneras de la ilustración is more than a publication edited to accompany the exhibition, it is the result of a research work carried out over two years by the curators Marta González and Josefina Alix.

A long list of women artists has been discovered in the Museum’s Collection: 105 female illustrators have been identified to have worked in the magazine Blanco y Negro and the newspaper ABC, and 41 have been selected for the catalogue. The main goal of the book was to include a thorough study of their biographies. The curators have traced the trajectory and life of all the selected artists to show their works to the public and to serve as a starting point for future studies that complete the history of illustration. In addition, the historical context of the artists (from 1891 to the 1990’s) is narrated in the essays by Mercedes Replinger (professor at the Faculty of Fine Arts of the Complutense University in Madrid) and Ángeles Caso (writer, journalist and editor).

Dibujantas is a title that refers to the acclaimed I Salón de Dibujantas that took place at the Lyceum Club Femenino in 1931, and it shows the works of the main female illustrators who collaborated with Blanco y Negro and ABC from 1891 to 1990’s. The catalogue is divided in four chapters covering a century of Spanish illustration. It begins with a section that brings together those artists who “Opened the way” at the dawn of the 20th century. The second section shows the artists that in the twenties and thirties received the nickname of “The Moderns”. Then, we come across “The postwar”, during the fifties and sixties, and the exhibition concludes with a section dedicated to the illustrators of the “New Airs” who, from the seventies onwards, reflect a moment of great social and technical changes in Spain. Thus, the visitor will appreciate original drawings of artists as Mme. Gironella, Moaroussia Valero, Laura Albéniz, a.t.c. (Ángeles Torner Cervera), Piti Bartolozzi, Marga Gil Roësset, Maruja Mallo, Delhy Tejero, Viera Sparza, Ana María Badell, Coti (Lucrecia Feduchi), Adriana Exeni or Mar Ferrero, among others. 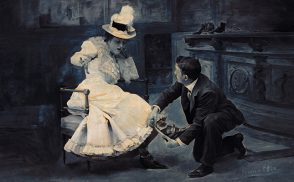