IN FRANCE — DRAWING THE WORLD

The works of the participants in our activity Drawing the world will travel to France!

A selection of the travel notebooks realized by the pupils and teachers of Dibujamadrid’s fifth edition (Drawing the world)  will be exhibited from November 18 to November 20 in the prestigious Fair of Clermont-Ferrand, in France, entitled: 17e Rendez-vous du Carnet de Voyage.

In 2015, we organized Dibujamadrid’s fifth edition, an activity of the Museo ABC whose aim is to pay homage to the art of drawing on travel notebooks. The program consists of a series of gallery talks that take place in the Museo ABC and also guided visits to Madrid to draw accompanied by professional artists. The edition of 2015 was entitled: Drawing the world and, thanks to the collaboration with the AECID (Agencia Española de Cooperación Internacional para el Desarrollo), it took place in four different cities: Casablanca, Mexico City, Manila and Madrid. A selection of the travel notebooks drawn in these activities will be shown from November 18 to November 20 in the stand of the Museo ABC in the Fair of Clermont-Ferrand. 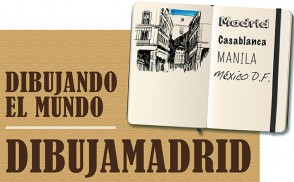