More than 500 pages conform the catalogue of the exhibition Historietas del tebeo 1917-1977 a little great story: the comic books in Spain. From 1917, the beginning of the magazine TBO, to 1977, with the apparition of the magazine Totem which supposed the boom of the comic for adults. Comics fulfilled the reading hours of several generations of Spanish children and adults. For these readers, «tebeos» were then an open door to the world. And nowadays they are considered an important episode of our artistic heritage and education.

This catalogue is structured in three chapters. First, in «Géneros, personajes y autores» [«Genres, characters and authors»] we review the comics’ history by genres, edition formats, creators and characters. «Intimidades del tebeo» [«Intimacies of comic»]  studies different issues as the almanacs, the foreign comics published in Spain, the graphic novels, fascicles, comics for adults and an overview of how comics were hand-maded. Furthermore, it includes a lifetime or chronology of comics and a brief biographical sketch of scripwriters and draftsmans included in the exhibition. All these texts are richly illustrated. 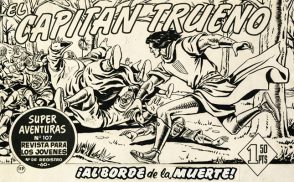